The selling season that never ends
admin
February 16, 2021
3:23 am
With pandemic conditions in place for a second spring, lenders and brokers discuss the indicators that will reveal whether the market is shifting away from the traditional selling season to one that runs hot throughout the year.… END_OF_DOCUMENT_TOKEN_TO_BE_REPLACED

With the conditions surrounding the upcoming spring home buying season looking much like last year’s — itself a dramatic departure from the past— a new normal might be established: a sales season that lasts throughout the year.

Home sales activity in 2020 was far different than any year in recent memory, as the pandemic forced changes to traditional patterns and practices. After the pandemic’s onset and subsequent lockdowns in March, April and May, buyers — many motivated by record low mortgage rates and the ability to work from home — began buying homes throughout the summer and beyond.

"The housing market is unseasonably hot — it's behaving like it normally does in the spring, with plenty of demand from homebuyers," Redfin Chief Economist Daryl Fairweather said in a Jan. 15 press release. "Typically, the vast majority of homes for sale in December are homes that have been sitting on the market because they're overpriced or there's a problem with the property. This December, with so many Americans moving, scores of desirable homes hit the market — but not enough to satisfy insatiable demand from homebuyers."

That was borne out in data from ShowingTime, a scheduling platform recently purchased by Zillow, which tracks the average number of appointments received on active property listings.

In December, in-person home visits surged 63.5% on a year-over-year basis, the company reported.

About 17% of Americans who have not purchased a home since March 2020 plan to do so prior to the end of 2022, according to a MyWalletJoy survey of 2,723 adults conducted between Dec. 9 and 11, 2020. Furthermore, 24% of those not planning to do so over that same time frame wish they could. 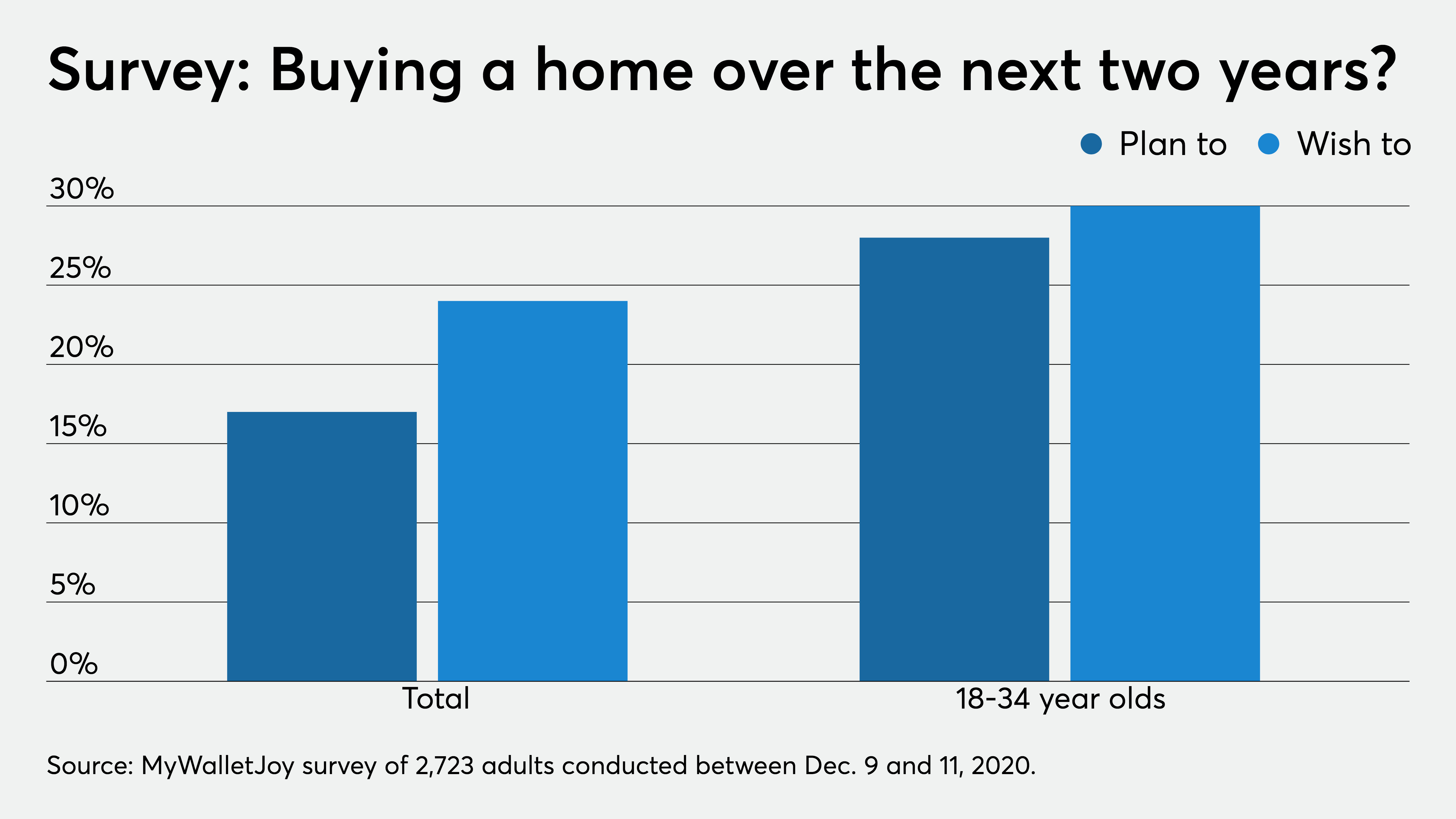 Given the continued spread of COVID-19 and projections that vaccinations won’t be reaching the broad swath of the population until summer at least, 2021 is likely to mirror 2020 in both activity and process. Rather than one, concentrated spring season, the market will be host to a year-round frenzy of activity.

Certain indicators can offer hints as to which way this year’s spring selling season is going to go. The success of vaccine rollouts across the country are one place to look.

But problems with vaccine distribution in a number of areas make it unlikely that sellers would reach a greater comfort level any sooner than April, at best, "and whether people immediately rush out the door to buy a home remains to be seen," Duncan said.

The number of in-person visits to listed properties in January should provide an accurate forecast of spring sales activity, said Michael Lane, president of ShowingTime. He’s eager to see how January numbers will compare to the same month last year.

"About the same will tell me that we might be shaping up to [it being] a typical year, but my gut tells me that we're not done with making up for lost time," said Lane. "There are lots of people that have not sold their home because they were uncomfortable doing it in 2020."

On the other hand, 2021 could be another year where the sales pattern is "odd" compared to the past, he said. "It won't be like the shut down in March and April last year, it will be a slow ramp up, but I bet you that June through December will be higher than two years ago."

Last year’s pandemic-related shifts should cause sales to boom both in the spring and beyond, said Andy Sachs, a real estate broker with Keller Williams in Newtown, Conn.

"It's really driven by expectations about how America's going to go to work," he said, adding that widespread work-from-home flexibilities and cost-saving efforts to reduce office footprints are long-term trends that will influence the market.

"And if that's the case, you're going to continue to push buyers out of the city, out of major metropolitan areas into the suburbs," and even beyond, where they might be able to get more value for their money, Sachs said.

In addition, the traditional sales curves have seen some flattening over the past decade, taking out the peaks and valleys of seasonality.

"Society in general is a little bit transient," Sachs said. Parents might prefer that their children be set to enter a new school district in the fall "but at the end of the day I don't think it is a driving force. So what we could see this season is a very, very robust summer into fall, into winter selling season when people feel comfortable letting people into the house to look."

Entities like fulfilment services provider Promontory MortgagePath are expecting heightened activity ahead. It's preparing for increased demand from lenders for its services by being a bit overstaffed, "so we're carrying a bit of a bench, a bit of a buffer," said its chief operating officer Debora Aydelotte.

"We hope for typical, but I don't think that's what's going to happen," said Aydelotte. "What we've been anticipating is a very bumpy reentry in 2021, [but] the spring selling market will arrive early in some places, based on pent-up demand."

As each listing becomes increasingly competitive for buyers, lenders may begin to feel some of the pressure. Getting loans through the underwriting process quickly could be the differentiator in getting the consumer's business.

Homebuyers are doing everything possible to make their offer the "best," said Tony Weick, president of Bell Bank Mortgage.

“Best” not just on price, but also "the strength of the approval, the lender the client is using, as well as how fast a buyer can close in some situations as well," Weick said.

"Every scenario will have different triggers, but lenders will need to be able to accommodate all aspects the clients and the markets are demanding during these times," he added.

For lenders who had to modify their practices during the pandemic, gearing up for this buying season will require further changes.

"We have had to think differently and learn from what's worked well, what we need to do more of, where we may need to adapt further," said Cameron Beane, head of pricing and secondary markets at TD Bank, which covers the East Coast markets from Maine to Florida. "We're going to have to continue to adapt to an economy that is so early in what ultimately needs to happen for us to be able to say we're out of the pandemic and we're back to normal, whatever normal may be.

"Certainly no one at TD knows what that is. We're all learning through the lens of supporting our clients."